When discussing the topic of Autism Spectrum Disorders (ASD), there are many questions that are frequently asked. I’ve composed a list of the most common questions along with the answers to the questions.

If you are interested in learning more about ASD, have some concerns about your child, or if your child was recently diagnosed with ASD, this is a great place to start!

What happened to the Asperger’s Syndrome diagnosis?

Asperger’s Syndrome was a diagnosis in the previous publication of the Diagnostic and Statistical Manual of Mental Disorders (DSM-IV TR). To be diagnosed with Asperger’s, children needed to exhibit restricted, repetitive and stereotyped patterns of behavior and impairments in social interactions without having any other delays in development.

As such, Asperger’s diagnosis was generally thought to be reserved for children who were higher functioning as these children did not have any delays in cognition or language development.

The Asperger’s Syndrome diagnosis was removed from the DSM-5 after the recognition of many inconsistencies in the diagnosis of Autism Spectrum Disorders.

Did the DSM-5 revisions affect any other diagnoses?

The new criteria for autism and neurodevelopmental disorders also removed other specific diagnoses that were previously listed in the DSM-IV TR including Pervasive Developmental Disorder – Not Otherwise Specified (PDD-NOS), Childhood Disintegrative Disorder (CDD), and Autistic Disorder.

In the DSM-5, children must exhibit persistent deficits in social communication and social interaction while exhibiting restricted and repetitive patterns of behavior in order to be diagnosed with an Autism Spectrum Disorder. The symptoms of an Autism Spectrum Disorder must present in early childhood and must impair the child’s everyday functioning.

The clinician then rates the severity of these deficits based on what level of support the child would require. The severity scale ranges from a 1 (requiring support) to a 3 (requiring very substantial support).

What are some examples of social communication and social interaction deficits?

Children diagnosed with Autism Spectrum Disorders may have difficulties:

What are some examples of restricted and repetitive patterns of behavior?

Children diagnosed with Autism Spectrum Disorders may have:

How are Autism Spectrum Disorders diagnosed?

There is no medical test, such as blood work, that can be done to diagnose autism. Rather, in order to make a diagnosis of an Autism Spectrum Disorder, clinicians need to observe the child’s behavior, socialization, communication, and development.

How common is Autism?

Autism Spectrum Disorders affect all races, ethnic, and socioeconomic groups, but it is more common in males than in females.

The latest research from the Centers for Disease Control and Prevention (CDC) estimate that about 1 in 68 children have an Autism Spectrum Disorder.

What are the causes of Autism?

Unfortunately, we do not know all of the causes of autism, but there are some risk factors that can make a person more likely to be diagnosed. These include:

Are vaccines associated with Autism?

Research continues to show that getting your child vaccinated is not associated with developing an Autism Spectrum Disorder.

Is there a cure for Autism?

At this time there is no cure for Autism Spectrum Disorders; however, research recommends that early intervention services are crucial for improving development. Unfortunately, many children do not get diagnosed early in life and therefore, fail to receive these services.

What should I do if I have concerns?

Make sure to speak to your child’s pediatrician and find a local provider that can conduct a comprehensive autism evaluation to determine if your child meets criteria for an Autism Spectrum Disorder.

Jill Driest, PhD
Dr. Jill Driest is the founder of Foundations Pediatrics and a licensed psychologist in the state of Florida. She graduated with her Bachelors degree from the University of Florida and received her Masters and Doctorate in Clinical Psychology from Nova Southeastern University.
Recommended Posts

Delivered to your inbox once a month. Immediately receive a FREE guide to planned ignoring. 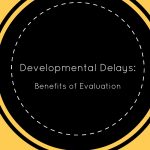 Evaluations for Developmental Delays: What to Expect and Why They Are ImportantTesting